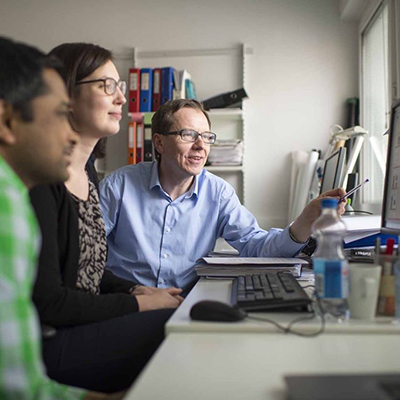 In 2007, Westermarck lab identified at Turku Bioscience Centre that tumor suppressor activity of PP2A is inhibited by CIP2A. Thereafter more than 300 publications have confirmed the oncogenic activity of CIP2A and collectively demonstrated that CIP2A would be a very attractive future cancer therapy target protein. However, it has been unclear what would be the cancer types in which CIP2A targeting would have most profound effects and whether CIP2A has important target mechanisms beyond its classical role in regulating PP2A-mediated dephosphorylation of oncoproteins like MYC.

Very recently the work by Westermarck lab identified CIP2A as a non-genetic driver for one of the most aggressive human cancer types, basal-like triple negative breast cancer (BL-TNBC). They also discovered a totally novel functional role for CIP2A in regulating DNA-damage signaling. Based on these breakthrough findings there is a pressing need to understand the mechanistic basis of essentiality of CIP2A in homologous recombination defective cancers (such as BRCA mutant). In parallel, CIP2A has been identified as a target protein for unconventional breast cancer therapy strategy based on nutritional fasting, combined with chemotherapy.

In the Cancer Foundation funded project Westermarck lab will develop a CIP2A/PP2A-focused biomarker panel for characterization of the TNBC patients treated in the on-going clinical trial testing this combination therapy. This work has potential to lead to drug development and thus may facilitate therapeutic targeting of CIP2A in cancer in the future. Collectively the proposed work represents high-quality translational cancer research with genuine aim to discover novel treatment strategies for BL-TNBC patients.