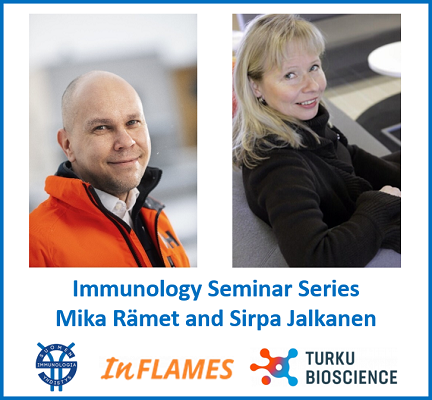 Zoom link and iCalendar invitation to join the online event will be sent to all registered participants one day before the event.
Registration to this event closes April 19th at 12:00.

Dr Mika Rämet, Professor of Peadiatrics, received his MD and Ph.D. degrees from the University of Oulu, Finland. Rämet worked as a research Fellow at the Harvard University, Boston from 1999 to 2002. After returning to Finland, he has received Specialist’s degree in Peadiatrics and Neonatology at the Tampere University, Finland. He has led his independent research team since 2003.

Dr Rämet’s research centers on the basic mechanisms of immune response using primarily non-mammalian models such as the fruit fly, Drosophila melanogaster and zebrafish Danio rerio. He was the first to demonstrate the power of RNAi screening in cultured cells. Nowadays he uses model organisms to investigate host-microbe interactions primarily related to the most important paediatric pathogens. In addition, he has focused on identifying genetic alterations predisposing to the preterm birth and to the most important diseases related to prematurity (bronchopulmonary dysplasia, RDS) and susceptibility to severe respiratory infections during neonatal period.

Dr Rämet has received several honours in recognition of his research including awards from the Society for Pediatric Research (Fellow Clinical Research Award), the Finnish Medical Association Duodecim (Young Investigator Prize given every second year to the most promising medical scientist in Finland), the Finnish Pediatric Association (Helena and Niilo Hallman Award given every second year to the internationally recognized young Pediatric scientist in Finland) and the Anders Jahre Prize for young scientist

His research has been funded by the Jane and Aatos Erkko Foundation, the Academy of Finland, Sigrid Juselius Foundation, Tampere Tuberculosis Foundation and Stiftelsen Alma och K. A. Snellman Foundation.

The main interest of Sirpa Jalkanen’s research group has been in the mechanisms mediating the cell trafficking in harmful inflammations and cancer. She has published more than 350 peer-reviewed papers and has more than 10 patents. She is an EMBO member and a member of Academia Europae and has received several awards and honours such as Eli Lilly award, Maud Kuistila Prize, Anders Jahre Prize, Äyräpää Prize, Datta Medal, and 2ndEuropean Women Innovator Prize and the Finnish Pharma Industry Prize.

She has also several positions of trust. Currently, she is a chair of the board of two major Finnish Foundations financing research and a board member of three others. In addition, she is a co-founder of two biotech companies – both publicly listed in stock markets (New York, London, Helsinki).