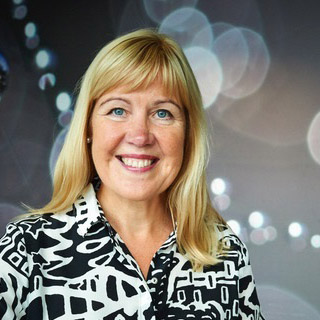 Perseverance is the secret to the success of Academy Professor Riitta Lahesmaa. Her approach follows a simple principle: if at first you don’t succeed, try and try again. She keeps her eyes fixed on the future and does not dwell in the past.

“I’m open to new things and keen to find new ways of doing them. Curiosity is what keeps me going. And whenever even small crumbs of success come our way, we’re extremely happy,” Lahesmaa says.

On the day the interview was scheduled, one of the scientists on Lahesmaa’s team had found two such crumbs. The team had finally succeeded in imaging a non-coding RNA and showing the effect of a new factor that influences cell differentiation. Both results took a long time to be achieved.

Lahesmaa is a professor at the University of Turku and in her first term as Academy Professor. “I’ve immensely enjoyed spending time with my team during this Academy Professorship. I’ve reviewed results, planned new experiments and done a lot of reading, writing and thinking,” she says.

Lahesmaa has been the director of Turku Centre for Biotechnology since 1998 and is currently on leave from the Centre during her Academy Professor term. She has been a visiting professor in the United States on several occasions, at Stanford University, the University of California San Francisco (UCSF) and Harvard University.

Being a scientist was never an obvious choice for Lahesmaa. Originally, she wanted to become a specialist in internal medicine. After obtaining her doctoral degree, however, she did a postdoctoral stint at Stanford. Lahesmaa and her family were supposed to return to Finland after a couple of years, but their plans were derailed by the recession that hit in the 1990s. The position that she was about to take up was not filled because of the economic downturn.

So, Lahesmaa took up a job at the Swiss pharmaceutical company Roche located near Stanford. There she set up a team of her own and was offered other resources as well. It was a turning point that cemented her decision to stay on the scientist’s path. After five years, she applied for and got a post as an Academy Research Fellow with funding from the Academy of Finland. She was also appointed as director of Turku Centre for Biotechnology. These opportunities allowed her to return to Finland.

Throughout her career following her doctoral degree, Lahesmaa has focused on studying the regulatory mechanisms of the human immune system. T cells play a crucial role in protecting the human body. Their task is to make sure that the body recognises pathogens such as many microbes and viruses. T cells do not usually attack tissues in their host body. However, if something goes wrong in the immune regulation, T cells may attack their host tissues, such as tissues in the pancreas or the brain. In the case of multiple sclerosis (MS), this causes inflammatory lesions in the brain. In rheumatoid arthritis, inflammation develops in joint tissues. That is why it is crucial that the immune response is working properly.

“T cells are key regulators of the immune response. They’re well trained as they mature in the thymus at an early stage of development, and they recognise alien invaders but not their host’s own tissues. However, in autoimmune disorders and inflammations, this tolerance breaks. The body’s own tissues or structures may be broken and replaced by new kinds of structures that the T cells haven’t seen before. That’s when the T cells start attacking the body’s own tissues,” Lahesmaa explains.

In the case of cancer, in turn, the immune system may have weakened so that it cannot trigger a response to remove cancer cells. The Nobel Prize in Physiology or Medicine 2018 was awarded to two scientists who had discovered a form of cancer immunotherapy. Their research has many elements in common with Lahesmaa’s research. The two scientists had identified cell surface structures that act as brakes on T cells. They had discovered that releasing these brakes allowed the T cells to function normally and kill tumour cells. The therapy has proved especially effective against melanoma.

“We’re searching for new factors and mechanisms that either activate or hinder T cells. It’s a key concept in the immune response as a whole. A better understanding of these mechanisms would allow us to develop new therapies to prevent and treat autoimmune diseases,” Lahesmaa says.

In their research, Lahesmaa and her team make use of cell models. They isolate cells from placental blood, that is, cells that have yet to encounter any external factors and that are unaware of their task. Such cells are good targets for studying factors and molecular mechanisms that lead to cell activation and differentiation.

“We’re trying to figure out the mechanisms that turn cells either into regulatory T cells or into active effector cells. Regulatory and effector cells are created from the same cells. The long-term goal is to alter the way the cells function in the desired direction. We’ve already discovered several factors that steer cell differentiation and function. If we could influence those factors, we could change a cell’s destiny.”

Lahesmaa’s hypothesis is that as cells differentiate, previously poorly known regulatory areas that are central to the process affect the ability of cells to differentiate into regulatory T cells, for instance. Individual variation in these areas may weaken a person’s ability to produce such cells, which increases their risk of autoimmune diseases.

Lahesmaa’s team has observed such regulatory factors in areas of the genome that have also been shown to contribute to predisposition to autoimmune diseases. Earlier this year, they reported having found a new factor that affects the development of regulatory T cells. They are currently running further experiments to find out the exact mechanisms of the factor and how it affects immune cells in cancer tissue.

“Hopefully our work will go on and we will continue to receive funding for studying the regulation of the immune system; there is very limited knowledge on human immune regulation. So, it’s a very topical subject, and a fruitful one, too. In recent years, new drugs have been introduced to treat cancer and autoimmune diseases, and novel drugs could be further developed to influence T cell mechanisms,” Lahesmaa says.

Original text in Finnish and photo by Leena Vähäkylä