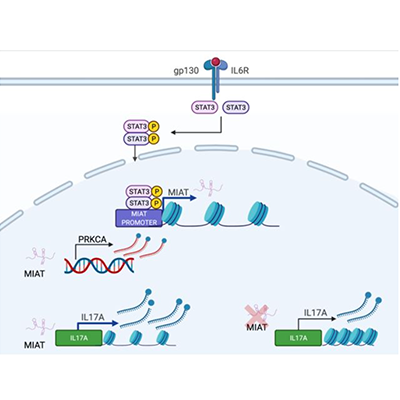 Long intergenic noncoding RNAs (lincRNA) are emerging as novel regulators of biological processes, including cell differentiation and development. While Th17 cells are required for clearing fungal and bacterial infections, dysregulation of Th17 response can result in autoimmunity such as rheumatoid arthritis.

First demonstrating  that MIAT is significantly upregulated during early human Th17 cell differentiation they then showed that it is regulated by STAT3, a key transcription factor driving Th17 differentiation.

MIAT resides in the nucleus and appears to regulate the chromatin accessibility of key Th17 loci including IL17A locus.

The study was published in the Frontiers of Immunology. The study was funded by the Academy of Finland, The Sigrid Jusélius Foundation, the Jane & Aatos Erkko Foundation and InFLAMES Flagship.