Common and rare SORLA single nucleotide polymorphisms have been associated with the development of Alzheimer’s disease. So far, SORLA has been mainly studied in neurons, but the new study focused on the role of SORLA in cancer cells. Led by Academy Professor Johanna Ivaska, the research group observed that SORLA was highly expressed in HER2 positive cancers. Removing SORLA from cancer cells severely impaired the oncogenic fitness of HER2 positive cancers. 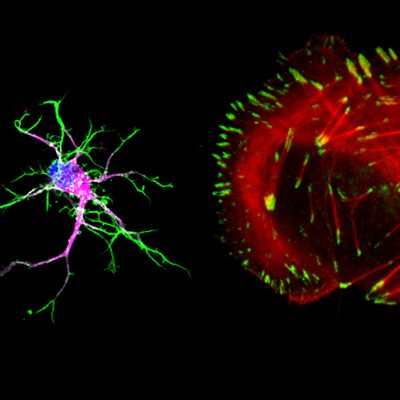 HER2 is a strong driver of tumour growth. HER2 amplification occurs in about 20% of breast cancers and overexpression or amplification of HER2 is also commonly found in bladder and gastric cancers. HER2 targeting therapies, such as Herceptin, are widely used in clinics and it plays an important role in the treatment of HER2 positive cancers. However, some patients will eventually progress during the Herceptin treatment and some do not respond to it at all. The newly discovered role of SORLA in regulating the oncogenic fitness of HER2 offers novel possibilities to target HER2 positive cancers in the future.

– Our study showed that removing the SORLA protein from HER2 positive cancer cell lines, from which some were sensitive and some resistant to Herceptin, strongly inhibited the in vitro proliferation of these cells. More importantly, removing the SORLA protein from these cells prevented tumour formation and growth in mice. So far, the role of SORLA in cancer has been unknown, and our discovery on HER2 positive cancers being dependent on SORLA was surprising, since this cancer type has already been widely studied, says former Ivaska Lab member and Postdoctoral Researcher Mika Pietilä, who is the main author of the paper.

– No clear reason has been found yet for the inverse association between Alzheimer’s disease and cancer. Our results, which show that SORLA promotes the aggressiveness of certain cancer types, could be one factor among others in this phenomenon, suggests Ivaska.

The Ivaska Lab is located at the Turku Bioscience Centre that is operated by both the University of Turku and Åbo Akademi University.

The next goal is to find a way to block the function of SORLA in tumour cells and thus develop SORLA targeting treatment. This part of the study is already running and funded by the ERC Proof of Concept funding. The study is also funded by the Cancer Foundation Finland’s Pink Ribbon Campaign.

The study was published in the high-ranking journal Nature Communications. 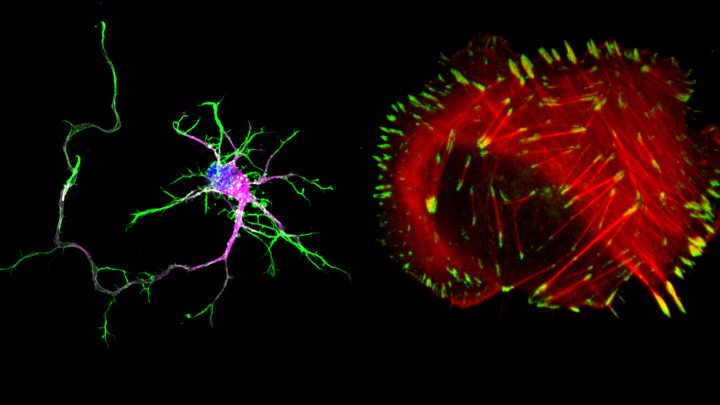 The image taken by PhD Guillaume Jacquemet from the Turku Bioscience Centre’s Cell Image Core unit shows how different neurons and cancer cells are by their morphology. The protein SORLA plays a different but important role in both of these cell types. On the left: Cytoskeletal protein actin (green), nucleus (blue) and MAP2 protein (purple) are stained in a neuron isolated from rat brain. On the right, cytoskeletal actin (red) and paxillin protein (green) are stained in a cancer cell.