World leading diabetes research foundation JDRF from the United States has granted the University of Turku three-year funding for its PAMP project (Pathogen Associated Molecular Patterns) with the total sum of over €520,000. 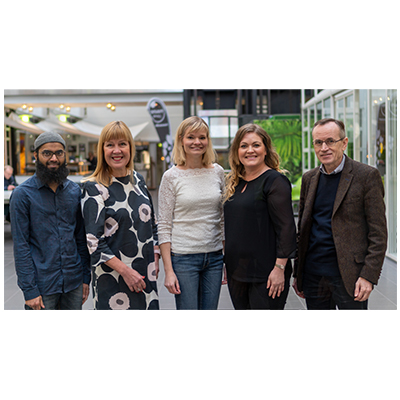 The PAMP project is conducted by Postdoctoral Researcher Ubaid Ubaid and Academy Professor Riitta Lahesmaa from Turku Bioscience Centre, and Senior Researchers Mari Vähä-Mäkilä and Mirja Nurmio and Professor Jorma Toppari from the Institute of Biomedicine.

The funding was granted for the leader of the Type 1 Diabetes Prediction and Prevention (DIPP) study in Turku, Professor Jorma Toppari, and Academy Professor Riitta Lahesmaa as well as Senior Researchers Mari Vähä-Mäkilä and Mirja Nurmio.

The PAMP research project was founded by Mari Vähä-Mäkilä in 2009 with the objective of studying the role of innate immunity in the pathogenesis of type 1 diabetes. PAMP is part of the national DIPP diabetes study.

– Launching the PAMP research project would not have been possible without the support and belief Professor of Paediatrics Olli Simell had in me, Vähä-Mäkilä says.

Type 1 diabetes is one of the most common chronic diseases in the world and, in proportion to the population, most common in Finland. Research has shown that the development of the type 1 diabetes begins even years before the first symptoms appear but the disease is diagnosed much later.

Understanding the mechanisms in the development of the disease and recognising the early signs is important for e.g. developing preventive medication.

Aiming for better prevention and prediction of type one diabetes

Innate immunity develops already during the foetal period and functions immediately after birth. Adaptive immunity, on the other hand, develops as a response to foreign microbes and other molecules, leading to enhanced responses to subsequent encounters with them.

During the last ten years, the researchers have collected 17,000 samples from over 300 children in Southwest Finland. In the sample collection phase, the cells were exposed to different components of bacteria and viruses. Now, with the help of the new funding, the genetic and epigenetic changes in resting and activated innate immune cells of non-progressors and T1D progressors will be analyzed.

– The phase we are now moving to would not have been possible without the funding we received from JDRF and the Lastentautien tutkimussäätiö paediatric research foundation, Toppari says.

The researchers want to find out how heterogeneous a disease type 1 diabetes is. They wish to discover whether e.g. the age when the disease develops or the speed of developing the disease are relevant. They also aim to identify new biomarkers to improve the prevention and predictability of type 1 diabetes.

Having been operating since 1994, the DIPP follow-up study offers a unique collection of follow-up blood samples taken from children with increased genetic risk of developing the disease. Therefore, the ones that enable the research are the families who have kept participating in the DIPP study over the years.

– Without the commitment of the families to participating in the study, we would not be able to use such unique data in studying the pathogenesis of diabetes, Vähä-Mäkilä and Nurmio tell.

Read this article in Finnish